The book: Why the U.S. Men Will Never Win the World Cup

When you order, I'll contact you to ask if you want something particular when I sign it -- say, "Dear Christian P, Here's some motivation for you, Beau Dure." Shipping within the U.S. is included. If you're overseas, we'll work something out.

Also order at Rowman & Littlefield or Amazon. Or anywhere. I’m not picky.

Immediate fixes — a new coach, a revamped professional league, a commitment to coaching education — won’t put the USA in the global elite. The nation is too fractious, too litigious, too wrapped up in other sports, and too late to the game.

Why the U.S. Men Will Never Win the World Cup: A Historical and Cultural Reality Check draws on 20 years of covering soccer — on the field and behind the scenes — along with hundreds of documents, news stories and other citations to trace more than 100 years of history and the culture that only recently lost its disdain for the global game. We don’t have the depth of soccer insight and passion that much of the world has had for generations.

The difficulty isn’t any single thing — the mismanagement of failed leagues, the inability to agree on a path forward, the lawsuits that stem from an inability to agree, or the unique American culture that treasures its homegrown sports. It’s everything.

But with the right long-term changes, the U.S. can build a soccer environment that consistently produces quality players, strong results, and a lot more fun on the international stage. There’s just nothing to be gained by ignoring the obstacles this country faces.

No, this book isn’t just a bit of ranting peppered with pop culture references, though it’s safe to say South Park‘s Underpants Gnomes will make an appearance. 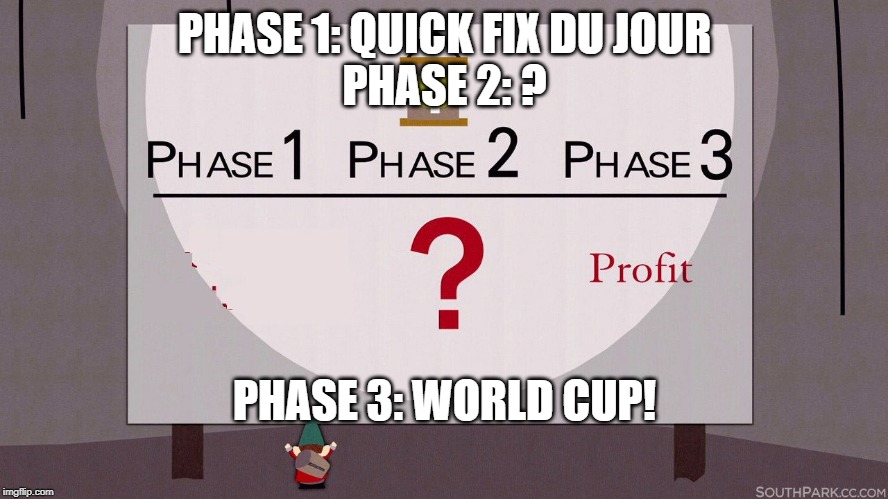 So if you want to prove me wrong, you’d better arm yourself with the information you’ll need to make it happen. Read this book to learn what you’ll have to address. Then come up with the long-term solution.

WHAT’S IN THE BOOK?

Listen to it here:

Chapter 1: We play too many other sports

In the 19th century, while the English were busy splitting the chaotic sport of “football” into what we now call rugby and soccer, American college kids got the idea of picking up the ball and running with it under a cumbersome set of rules and a whole bunch of lines painted on a field. That’s American football. We also invented basketball. We invented the myth of the invention of baseball, but it’s also a uniquely American sport. Our neighbors in Canada invented ice hockey. All of these sports are firmly embedded in our culture. To a lesser extent, so are lacrosse, skateboarding and even ultimate frisbee. Put another way — in other countries, it’s soccer first, then everything else. In the United States, soccer is fighting for fourth place.

Chapter 2: We watch too many other soccer leagues to focus on our own

Soccer has finally arrived in the United States! We have wall-to-wall coverage on weekends. You can get up at sunrise and watch England’s Premier League, then Germany’s Bundesliga or perhaps Spain’s La Liga. When the evening rolls around, watch soccer from Mexico. We can easily watch five or six soccer games on a given day — and it’s quite possible none of them will feature an American team or even a single American player.

Chapter 3: We’re insecure about our identities

We watch other soccer leagues because we’re wanna-be hipsters. Thirty years ago, being a soccer fan of any kind carried a sort of outsider’s cachet and the smugness of feeling superior to the Great Unwashed who watched brutal sports like American football or boring sports like baseball. Now that Major League Soccer is entrenched rather than just a scrappy underdog, we all need to turn up our noses at it and look to Europe or Mexico.

Chapter 4: We can’t agree on anything

As Monty Python said, yes, we are all individuals. And we’re a melting pot of ideas, which would be a good thing if the coaches from different parts of the world would work together instead of insisting their specific homeland did everything right, and the rest of us are doing it wrong.

Chapter 5: We can’t stop suing each other

Those disagreements from the last chapter? Yeah, they often end up in court. Soccer law is now a thriving industry, and the typical soccer show on the radio may feature more lawyers than coaching analysts. We have nearly 100 years of landmark cases. Each time it happens, soccer’s progress in this country freezes or goes backwards.

Buckle up. This book has hundreds of citations, and many of them are in this chapter.

This isn’t just some rant. This is more than a century of documentation, distilled down to a digestible few thousand words.

We’ll see how much time the USA lost. The national team was inactive or winless for several years at a time. Pro leagues came and went. And yes, it opens with another Monty Python reference. (“All the kings said it was daft to build a castle on a swamp, but I built it all the same, just to show ‘em. It sank into the swamp. So I built a second one.”)

“Hey, if we just get our professional leagues to put in promotion/relegation, everything will get better!” Well, no, because it’ll scare off a lot of people who’ve already invested or are planning to invest.

“Hey, everything will be better if we make youth soccer free!” OK. Who’s going to pay for that?

“But Germany changed everything! Haven’t you read Das Reboot?” Yes. Did you notice that the federation in Germany is empowered to do pretty much whatever it wants, and everyone has to follow suit? It’s the opposite here.

We’re just not going to fix everything with one presidential election or one good hire. Our issues run far deeper, and some can’t be solved at all.

Chapter 8: We’re too serious to succeed at a sport built on joy

Brazil doesn’t have a well-organized or well-financed professional league. Its best players — and hundreds of others — go overseas to play. The World Cup it hosted was a fiasco, spawning multiple investigations and civil unrest.

But when 11 players put on the yellow jersey and play, they’re rarely the underdog. Why? Because they love the sport. The beaches, the streets, anywhere a ball (or a reasonable facsimile thereof) can be placed on the ground — that’s where they play. They are in love with jogo bonita, or “beautiful game.”

Here? We’re programming the fun out of the sport. Don’t play with your high school classmates — you need to be in this Academy system instead. At age 8, we’re going to hold a tryout in which one-quarter of you will get snazzy uniforms and exalted status, and the rest of you will told you’re deficient.

Chapter 9: But will the women keep winning?

Possibly. The USA got a nice head start over most the world, propelled by college leagues that had the best women’s soccer in the world before professional leagues popped up. We still take women’s sports more seriously than most of the world. But many of the same issues — the rot in youth soccer, the difficulty in sustaining a professional league — may eventually catch up with us. We’ve already seen an Olympic team bounced from the competition early, and we’re seeing some lackluster results at youth level. The U.S. women should still be a world power for years to come, but it’s not something we can take for granted. Even if we do everything right, we can’t (and surely shouldn’t) stop the rest of the world from becoming more competitive.

If soccer fandom were limited to those who were successful, it wouldn’t be the global sport. It wouldn’t be played on dusty African streets. It wouldn’t inflame passions in Central America and the Middle East. We wouldn’t see English supporters hopping on the train on a Saturday to travel 100 miles to see their third-tier club play a dreary game against another third-tier club.

At times, you may think the game hates you. That’s no reason to hate it right back. You can find joy from every pickup game to every unexpected success.